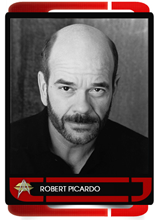 This is an impressive cast for a pilot which is being produced for the web. With this much talent behind the series there is every possibility of having the same level of success that Sanctuary had (which itself began as a web-series).

Watch this one closely, as Nemec and Picardo may not be the only Stargate actors who end up appearing in this Trek project The official website for the project is www.startrekrenegades.com